Zach Westerbeck is a mental health public speaker with a PASSION for helping college students and organizations understand the complexities of depression and anxiety in today’s modern world. Through his personal experiences and extensive research, he is able to relate and clearly articulate why now more than ever it is critical to understand how to manage your mental health. 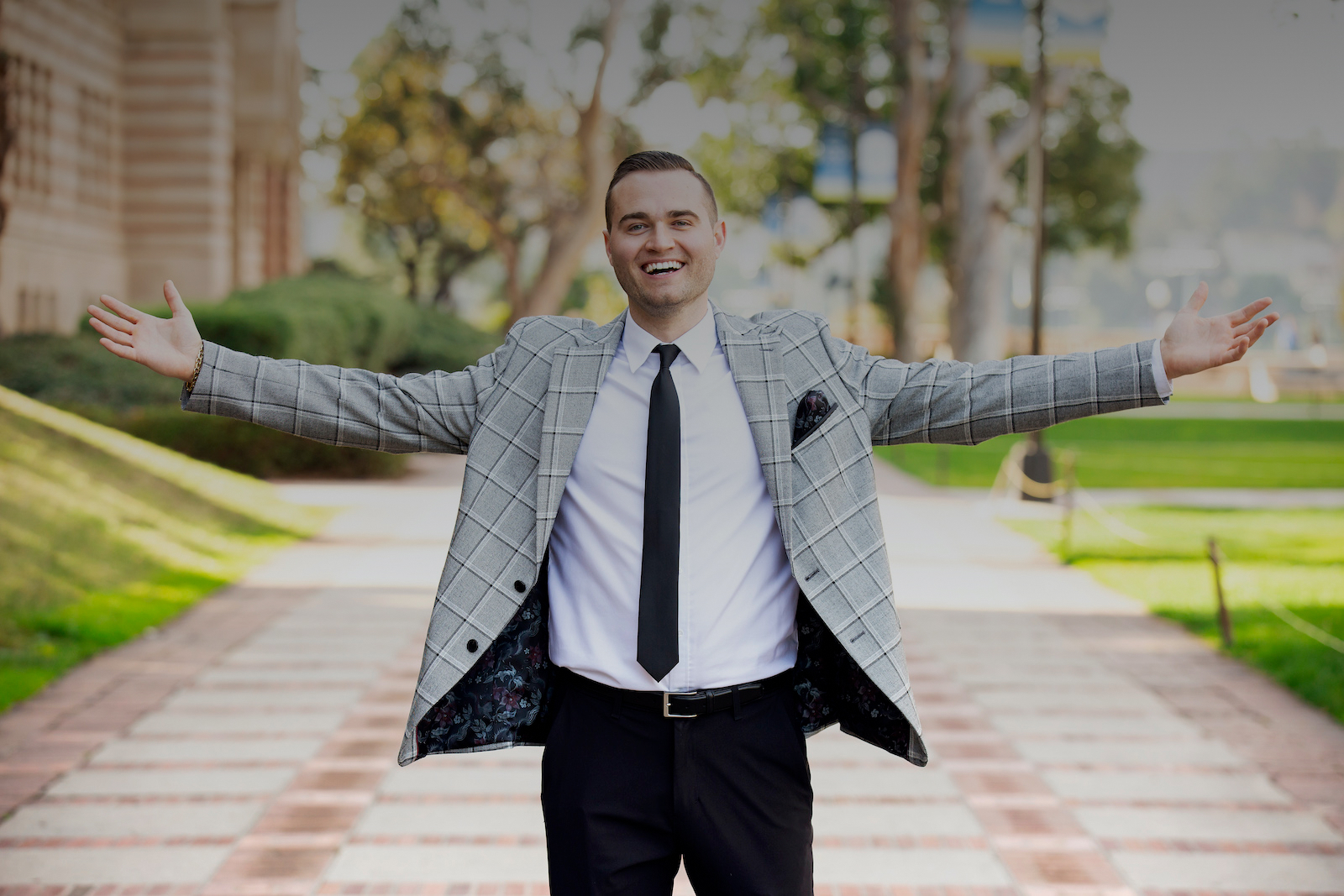 And above all else, I am the partner to an amazing woman. I’m also a professional mental health speaker, College Success Coach, and author of the book “You’re Not Alone”.  My mission is to help educate college students and organizations around the world to understand the complexities of depression and anxiety in today’s modern society.

Candidly, I didn’t always know this would become my life’s work. I’ll explain.

In late 2015 I began to experience physiological symptoms in my body that I was unfamiliar with. At first, it was a pounding heart, dry mouth, sweaty palms and racing thoughts every morning as soon as I woke up. I had no idea what was going on, but I knew I didn’t like it.

Because I wasn’t educated on the signs of anxiety, I decided to keep this to myself and figure it out on my own. In all of my infinite wisdom, I determined that my brain had flipped a switch, like how someone turns a light bulb on and off, and all I needed to do was flip it back to the way it was before.

As I wearily rolled into 2016, the symptoms of anxiety had intensified and an additional emotion had crept in. That was depression. Like a thick, grey fog rolling over the hill and into my life, my brain was filled with feelings of deep sadness and hopelessness.

I was 24 years old, living in a new city far from home and battling a foe no one else could see and I couldn’t understand.

With panic beginning to set in I desperately tried everything I could to eradicate the feelings. No matter what I tried, nothing worked. Within a few months’ time, not only was I experiencing severe anxiety and depression, but I was thinking about suicide from the moment I woke up until the moment I fell asleep.

It wasn’t until I hit my rock bottom moment, where I seriously contemplated suicide to end the psychological pain, that I realized I needed to get help.

I confided in my support system and ultimately scheduled my first appointment with a psychologist.

In late 2016, I was diagnosed with a chronic anxiety disorder known as Obsessive Compulsive Disorder (OCD) where the core symptoms are severe anxiety, deep depression and thoughts of suicide.

By utilizing intensive talk therapy, meditation, persistence, and making lifestyle changes I was eventually able to get my symptoms to a manageable place.

Through my journey of recovery I promised myself that if and when I got better, I would never let anyone else suffer in silence. I became Mental Health First Aid certified and began traveling the country sharing my story with thousands of college students.

My recovery was not easy or short. It took a lot of effort to relearn my brain, but years later, I am so thankful that I took the necessary step of seeking professional help. It has made all the difference in my life.

I recovered so I could prove to others that they could too. Now, my goal is to get in front of as many people as possible to let them know they are not alone and that hope for recovery is always possible.

Send me a message

I first met Zach at AFA in December of 2019 during a Mental Health Workshop. I was so impressed with his insight and understanding of how MH impacts college students that we sparked a conversation. Zach ensured to follow up with me after AFA. We formed a partnership as I currently serve as the Vice President of Collegiate Affairs for Gamma Alpha Omega Sorority. I had several meetings with Zach to discuss how our members needed to be supported during COVID-19 and the impact the pandemic has had on their Mental Health. He was efficient, knowledgeable, and engaging. The booking process was a breeze and the virtual workshop made such an impact on our members. I would recommend Zach a million times and I look forward to our continued partnership.

As we entered into the COVID-19 pandemic, my institution, New York Tech, became incredibly concerned about the mental welfare of our students. I initially met Zach at NGLA in Baltimore, MD and had a great discussion about mental health, the challenges we face, and how to better support our students. Zach was incredibly flexible by hosting a virtual session with my students on mental health and self-care through quarantine and finals. The students loved the content and it was straight to the point. He engaged virtually by asking questions, providing advice and examples, and offering resources that are available to all individuals. I cannot wait to bring Zach back to campus and to continue this discussion on mental health with my student body.

Amidst the COVID-19 pandemic, Zach has been a bright light for Chico State’s campus when we brought him back for 2 virtual sessions to help students navigate their own mental health challenges during quarantine. Both sessions had great participation and students felt heard and understood and also left with tools for how to navigate the unknowns ahead. As repeat customers of Zach we can confidently say that his services provided a unique and engaging perspective to our students!

We brought Zach to campus to speak to our chapter leadership and his program was a success! It helped address a taboo topic of mental health and “brain” health and gave the students tools to bring back to their chapters to better assist their members in maintaining a healthy brain. I highly suggest this program for any college campus!

For the Fall of 2019 I was the VP for wellness on the Panhellenic council at Penn State and Zach came to speak for my Wellness week I planned. I started talking to Zach and planning this out with him in January right as I got into my term. We had a phone call and I really loved everything he had to say about mental health and the struggles we all go through. Zach was so relatable for me and I knew he would connect with others. When he came in he did 3 breakout sessions for me and was so accommodating. So many women went up to him at the end telling their stories and how thankful they were for him opening up that really hard conversation surrounding mental health. This was a really great opportunity for our Panhellenic women to open up about any struggles they have and to learn more about what mental health is and how to take care of ourselves. Zach was so great to work with and he truly broke the stigma surrounding mental health. I loved having Zach here and would love to see him return for other events in the future.

During this pandemic, my mental health was at a low and my mind was constantly racing with fear and sadness and all the what if’s of life. I was recommended to attend one of Zach’s mental health webinars and at first I was gonna push it off because I thought nothing could change the way I feel. I attended anyways and I am so glad I did. Zach showed me that so many other people that attended feel the exact way I do and that it goes get better and there are coping mechanisms that cater to different people. I would definitely recommend attending these webinars and I can’t wait to see how it helps others.

When I received an email about a Mental Health Webinar in conjunction with Gamma Alpha Omega Sorority Inc., the sorority I am a sister of, I was initially skeptical. I didn’t know how impactful a webinar would be amid a global pandemic, isolating people from external social interaction. However, when the workshop began, I was surprised by the slightly unorthodox approach Zachary took in discussing the importance of mental health (especially in these uncertain times). He allowed us to discuss different strategies for improving our mental health, checking up on one another while quarantined and gave us the room to express our feelings and emotions as human beings, college students, and people away from some of those we love most. Instead of having all of the “necessary” information in front of us, he allowed us to actively engage and contribute to the conversation as he filled out his slide presentation with all of the things we said on different topics. I know I appreciated the ability to be vulnerable/open about my mental health, as did many others from their parting expressions of gratitude toward Zachary. Overall, Zachary’s personalized and relatable approach to this mental health workshop surprised me and exceeded my expectations. Conversely, I am sure that your organization (whomever you may be) would also benefit from his knowledge and skills in the field of mental health awareness.

In October 2018, I was a co-chair responsible for programming a conference to help strengthen and unify Greek life at my university. We were excited and fortunate to have Zach present a session on mental health- a highly critical topic, especially amongst college students balancing school, work, Greek life, and other responsibilities. I appreciated that he took the time to familiarize himself with my school’s resources and the student’s needs so that he could best serve our specific community prior to coming on campus. In just an hour, Zach left the almost 100 attendees with greater awareness about mental health and with tips to help support oneself and others in their own personal mental health journeys…

In September of 2019 I served as the Vice President of Programming for Georgia Tech’s Interfraternity Council. One of my goals was to organize a guest speaker on mental health for our Greek Community and campus as a whole. We selected Zach and were far from disappointed! He made the entire process of planning and organizing the event incredibly smooth, was reliable and flexible in communication, and took the time to show up early and get to know the organizers and our campus. Over the course of his two-hour workshop Zach shared the story of his personal mental health journey and shifted our perspectives on this incredibly pervasive issue. Perhaps most importantly, his presentation style was dynamic and engaging enough to keep everybody interested throughout the event! I cannot recommend him enough for any sort of mental health related speaking engagement or workshop.

In Spring of 2019 I served as the VP of Service for UCSD IFC council. We hired zach to give a speech and program around mental health. It was during a time of unrest and great anguish among our Greek community and Zach’s involvement with the audience and understanding demeanor was exceptionally beneficial to our community. I would recommend Zach for any event around mental health and would say Zach is a perfect fit for on campus speaking events. He was very dynamic and interactive with the crowd, and of our week of events, Zach’s was the most successful.

Ready to work with me?