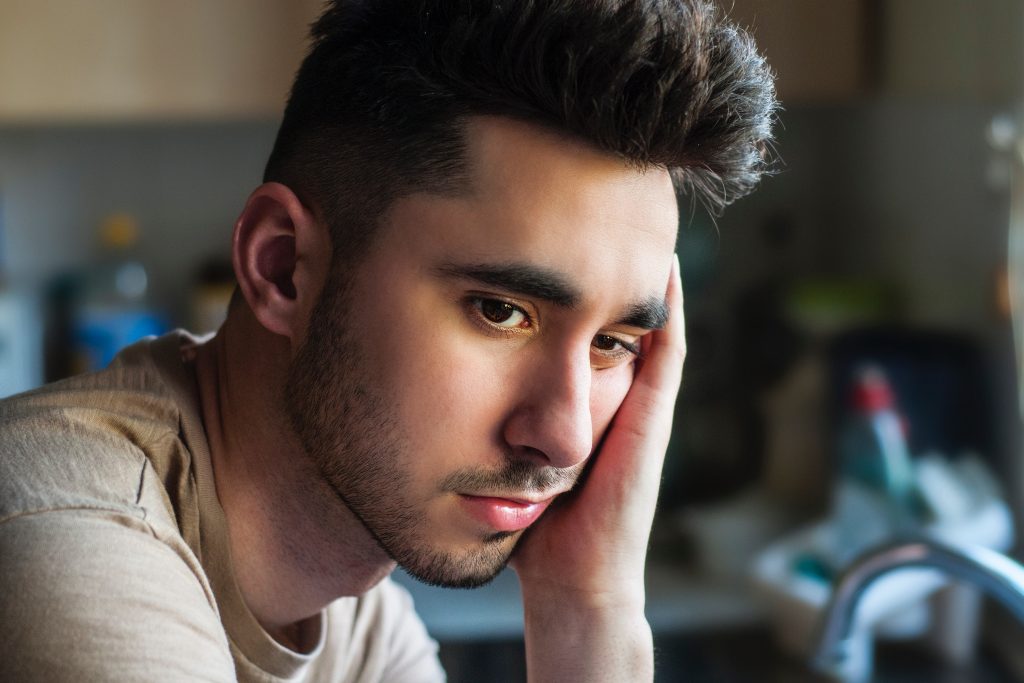 2020 has become the year we wish we could all put behind us. It was meant to be the kickstart of a new decade and an opportunity to refresh, reset, and refocus our energy on new goals and aspirations.

Then we all got punched in the gut by an unexpected pandemic that quickly turned into a mandated quarantine.

Early on, there appeared to be optimism amongst all of us: let this be the opportunity to learn that new skill, start that passion project, or go into business for yourself.

If you’ve found yourself feeling depressed or anxious at any point in 2020, please know that you are not alone. The Center for Disease Control and Prevention released a survey in June of this year that found that 62.9% of young adults reported feelings of anxiety and depression. Of that group, one in four reported experiencing thoughts of suicide.

Maybe you’re experiencing these emotions for the first time and aren’t sure where they are coming from or what you can do to improve them. You might feel hopeless and lost.

First, I want you to know that there is a path to recovery, and you will feel good again. You just have to take the correct action.

Second, I want you to consider that your emotional health (the quality of your thoughts, how you feel, etc.) sit on a continuum that fluctuates based on different internal and external factors.

Internally, you simply might be genetically predisposed to experiencing symptoms of anxiety and depression. For example, obsessive-compulsive disorder runs on one side of my family. The same way you probably know that cancer, heart disease, or diabetes run in your family, you need to consider your family’s history with depression and anxiety.

Externally, there are five factors that might be altering where you sit on the continuum. They are as follows:

The fear of becoming sick or getting someone else sick has created varying levels of uncertainty for everyone. This uncertainty stems from concerns of whether we’ve contracted the virus, if we should wear a mask or not, if the virus is actually as deadly as we’re being told, and how we need to conduct ourselves. The challenge is that every day presents a new piece of information, which oftentimes leaves us more confused and upset. This confusion and uncertainty can open the door to anxiety and depression.

Every day when I toggle between news outlets, I’m bombarded with a feeling of fear. Whether it’s a barrage of tweets, finger-pointing from both political parties, or uncertainty on how the election will play out, there is an undeniable level of newfound tension amongst Americans. A new divide has been created, and it feels like we’ve turned against each other. A survey found that over 40% of Republicans and Democrats said there would be “a little” justification to use violence if their presidential candidate wasn’t selected. This fear of violence and turmoil is stressful, and it creates instability and fuels hatred.

3)Isolation: Studies have shown that there is a link between loneliness and feelings of depression that is fueled by isolation. As human beings, we were not meant to spend between eight and ten hours each day in front of a laptop. We need interaction with each other in-person. It’s the hardwiring in our brains that demands it, and we’ve all gotten a very unhealthy dose of depravity.

4) Pressure to succeed: Despite the rollercoaster that has been 2020, the American culture of success over everything has raged on. College students across the country tell me that their professors have doubled down on assignments, giving them more work to do than if they were in-person. Employees in corporations, despite being given the opportunity to work from home, are bombarded with emails and calls from colleagues. We aren’t cutting each other much slack.

5) Lack of motivation: It hurts me to think of how many hours I have logged staring at the four walls in my one-bedroom apartment since first quarantining in March. Full days and sometimes several days at a time pass by where my fiancée or I have barely left our apartment. This makes every day feel exactly the same, and you might forget what day it is. This excruciating repetitiveness might’ve killed your motivation to be productive with school or work.

So what can you do to protect your mental wellbeing and reduce feelings of anxiety and depression? Below I have laid out my anecdotes from personal experience and observations in managing my own brain health during 2020.

Although positive in intent, an unintended consequence was created that caused unnecessary stress and pressure to do MORE during these unprecedented times. That’s why I’m here to tell you to do less. And I don’t mean completely shut things down, veg on the couch (unless you need rest), and poke your head out halfway through 2021. What I mean is to reframe those lofty goals, hobbies, and dreams to match the moment we’re living in right now.

Let me give you an example. If your goal was to go to the gym on your campus five times a week, it’s highly unlikely that is even possible. Most gyms across the country are either closed, transitioning to outdoors, or have limited capacity. You might not be able to afford a gym membership right now. So change your goal a bit. Instead of crushing the gym five times a week, maybe you reframe it to focus on getting any kind of movement five times a week. Or maybe you still go to the gym, but you scale it back to three times a week. Maybe your body won’t be exactly where you wanted it to be heading into 2021, but at least you’re still focused on your health and taking care of yourself. You can build on that.

By scaling back and reframing your expectations, you give yourself the dopamine hit it craves when you DO accomplish something versus every time you fall short because your goals are unrealistic for the time period.

Let’s face it, there has been a lot to drink about. Whether you’re bored and looking for something to entertain yourself, drinking to outrun that nauseating feeling American politics has created lately, or it’s a random Wednesday, and well, you just want to drink, I’m with you. The challenge is that alcohol, as much as we don’t want to admit it, isn’t good for us. Even more importantly, it’s not good for our brains. At a bare minimum, it disrupts your sleep so you won’t fall into REM (the deep sleep when we’re dreaming).

Scientists don’t know why REM happens, but they know we need it. And we need it every day to wake up feeling refreshed and re-energized.

Here’s something else to consider: alcohol is like gasoline on the fire of a depressed and anxious brain. Sure, in the moment, this liquid will drown out our worries, suppress anxiety, and make us forget we’re depressed. The next day, though, as that booze wears off, emotions of anxiety and depression will surge in, leaving us feeling more hopeless, anxious, and guilt-ridden than the night before.

Moral of the story: pick a night, have your drinks, and then stash the booze until the same time next week. Avoid drinking during the week (I personally won’t touch it), and really focus on your sleep. Your brain and your emotional health will thank you.

In every bit of it, whether it be catchy headlines or charismatic news anchors, fear is what we are shown, and deep down inside, fear is what keeps us on the edge of our seats. Unfortunately, we show up thinking we want to get the facts because we’re responsible Americans and want to be informed.

The challenge is, we always leave with much more baggage than the information we came to gather. In the last eight months, I have ended every media binge with a pause to reflect on how it made me feel. My biggest observation: I always leave feeling stressed, frustrated, hopeless, angry, upset, disappointed, worried, uneasy, or frankly, sad. Not once have I been left uplifted, optimistic, positive, upbeat, or happy.

Too many days in a row of media consumption can cause an increase in stress, overwhelm, frustration, anxiety, and depression. Do yourself a favor and limit how much news you throw on for the sake of your brain.

You see, my brain’s superpower is that I feel all of life’s factors very deeply now. Just like the bubble that signifies when something is level, my brain is in a constant balancing act. Stay up too late the night before, I feel it. Have a glass of wine with dinner, I feel it. If I have too much coffee, I feel it. Miss a workout, yeah, I’m feeling that too. But sleep, or lack thereof, is the biggest challenge.

On days when I get less than seven hours of sleep, I’m prone to higher levels of anxiety, racing thoughts, brain fog, depressed mood, headaches, and stress. Put bluntly, it sucks. I HATE not getting enough sleep, and when I don’t get enough too many days in a row, there’s a good chance you’ll find me curled up in the fetal position, cursing my brain, God, and everything else for me ending up with a brain disorder.

On the reciprocal end, when I DO get enough sleep (nine or ten hours), I feel like a different person. I wake up feeling like Richard Branson, GaryVee, Barack Obama, Matthew McConaughey, or Lebron James. I’ve got a pep in my step. Hell, I feel like I could walk on water, scale a mountain, or swim with dolphins. Most importantly, though, my symptoms of anxiety or depression are low or non-existent.

Bottomline, quality and quantity matter when it comes to sleep. Give yourself eight or more hours of sleep a night, and make sure you’re falling into REM.

“You kidding me!?” I thought. “There is no way anybody is going to know what is going on inside my head. I don’t know what the h*ll is going on, so neither will anybody else.”

My biggest error in thinking: I thought I was the expert. In all of my infinite wisdom, I thought I had the ability and training to cure myself of anxiety and depression. And, of course, there was the whole “I’m scared about what people will think of me” card coupled with the “This will go away in a few weeks” mentality that caused me to only reach out for professional help once I was having suicidal thoughts from the moment I woke up until the moment I went to bed.

My life lesson to you: Don’t wait to ask for help from a psychologist or therapist until you’re at your very lowest point. Instead, be proactive. Studies show that the sooner you address symptoms of anxiety or depression, the sooner you can get on a path to recovery and feel better.

You can begin that journey by going to PsychologyToday.com, typing in your zip code, and looking through psychologists, therapists, and counselors in your area. You could also try reading my book, You’re Not Alone, which is a step-by-step guide to overcoming anxiety and depression.

This hasn’t been the year we thought it would be, and it’s caused a lot of us to feel anxious and depressed.

Remember, there are many factors, like your genetics and the current state of our country, that can impact your emotional health. This is why it’s more important than ever before to take a proactive approach to your brain health by taking it easier on yourself, reducing alcohol use, not overconsuming media, getting plenty of sleep, and always asking for help from a brain health professional.

Ready to work with me?